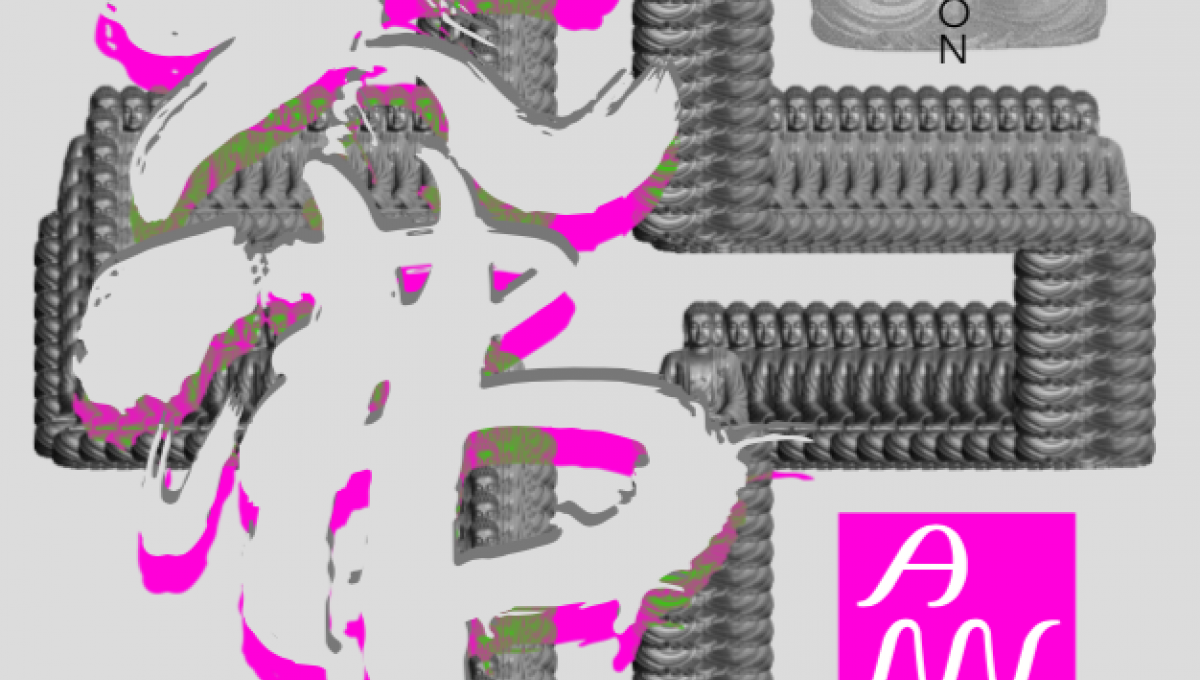 When you study at ArtEZ, it feels like you’re constantly busy running around the place: from classrooms to workshops, through the hallways. In doing so, posters and work of other students will flash you by. This happens to me a lot, but something definitely caught my eye this year. Again and again I would see the posters and email invitations of Asian Movie Night and I found myself wondering what it was. I attended The Secret Edition that took place in the living room of Oude Kraan 74 and interviewed the organization of Asian Movie Night. This initiative was founded by international students of Fine Art, Yuchen and Kleopatra, and now six students of different backgrounds and departments are part of the organization. Just like their events, this interview was hosted (and therefore written) in English. Asian Movie Night  is a bi-weekly event you should definitely not let pass you by. 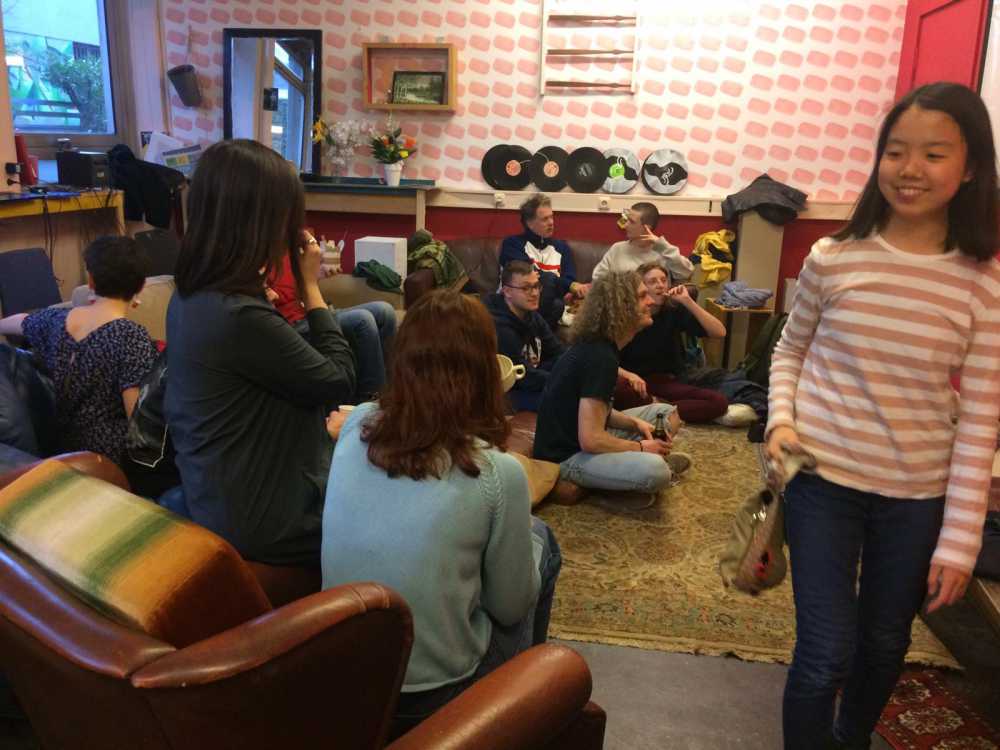 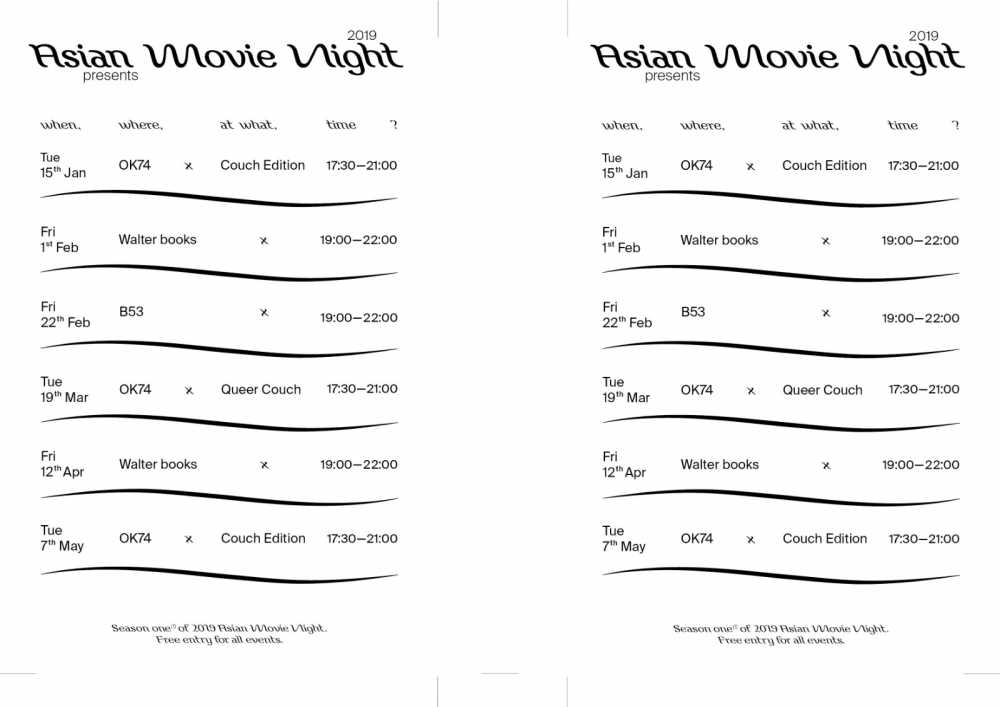 How did Asian Movie Night start?

Kleopatra: “It was Yuchen’s idea. I really liked it and joined in.”

Yuchen: “I think it started out as something really casual. Kleopatra knows a lot about Asian movies, so we would always discuss about them or figure out what we should watch next. Other than us, not so many people are familiar with Asian cinema or Asian cultures at large. So I thought it would be cool to arrange something, to organize something casual! It started out with a cozy and small movie screening at the OK 74 living room. Later it got expanded and we started hosting more editions at external platforms, like Bar de Groen and Walter Books. Right now we’re collaborating with Focus Film Theatre and Klooster Kino filmfestival Nijmegen.”

What does the organization look like? Who has helped build it? Are the members of different departments from ArtEZ?

Kleopatra: “Although me, Yuchen and Koen from Fine Art started this, we also have people from Graphic Design (Silvian & Heike) and DBKV (Dari) in our team. Silvian and Heike are the ones who help us create the posters, the flyers, next to helping with the decision-making.”

Yuchen: “Yeah, we’ve got a lot of help! The logo was designed by Zhizhong and the font was designed by Dong bin (both Graphic Design). Dari has recently become a member and has been doing really good in rallying people from DBKV to come and watch. And Anne from Fine Art is also a recent member.”

Do you get supported or funded by ArtEZ?

Yuchen: “I negotiated with the head of the departments Fine Art and DBKV. Fine Art supports us in printing costs of our posters, banners, flyers and other artworks. DBKV supports us in our internal costs, like travel expenses of our organization members. But also expenses of food, like popcorn!”

Kleopatra: “This is really helpful, because we don’t want to charge people for entrance fee. It’s important to keep it accessible for students.” 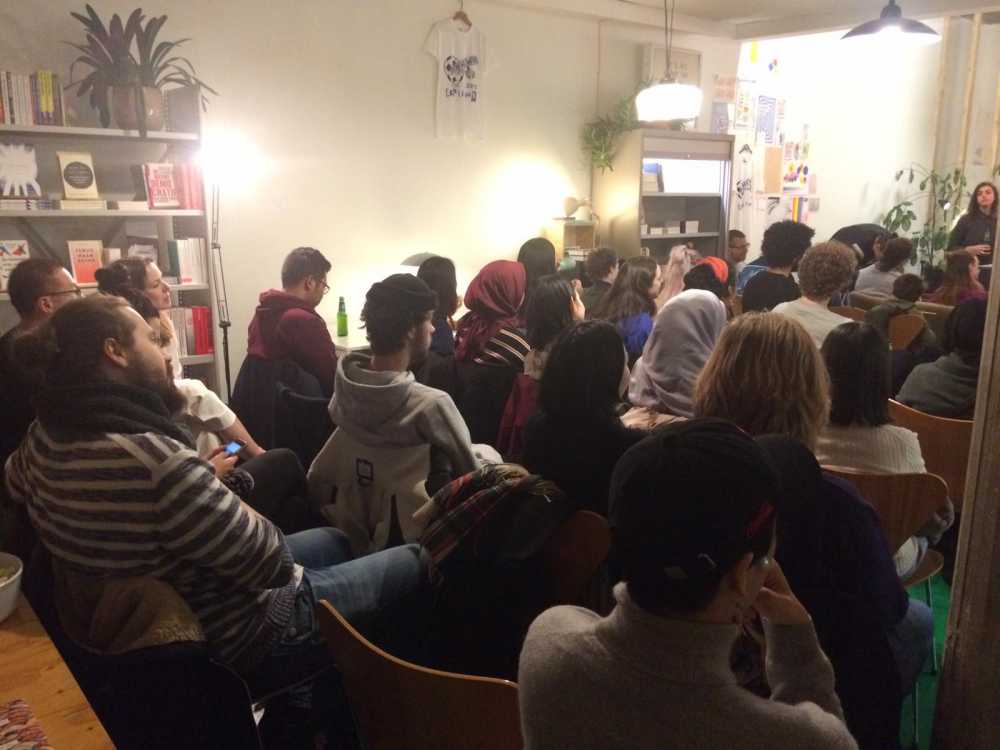 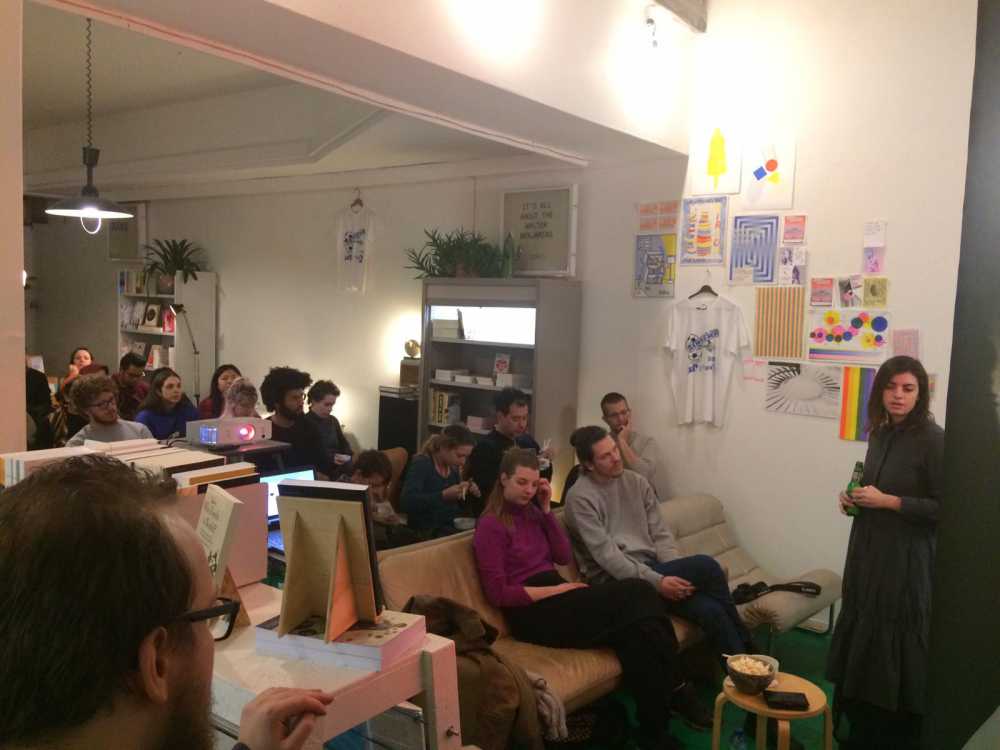 What’s your vision behind Asian Movie Night? Was it intended to build a bridge between Western cultures and Asian cultures?

Kleopatra: “Hm, to a certain extent, yes. I think it was more important for us to build a platform where we could merge the different audiences; the people who are familiar with Asian movies and the people who have yet to be acquainted with it.”

Yuchen: “For me, it started out with my surprise about how little people know about Asia. Because for me, Asia is so diverse and big, with a lot of rich cultures. But here, people don’t really know about it. So I started this as a way of promoting Asian cultures in a very comfortable setting. Not a lecture, not a PowerPoint, but movies. In my opinion, the best way to get to know a culture, is through movies. Now it has become a gathering place for Asian people as well. People from Japan, Korea, China, Taiwan and Indonesia, they all like to come and celebrate our familiar cultures together! So it’s definitely becoming a bridge for the Western and Asian audience.”

What kind of audiences do you attract? Is it mostly students from ArtEZ or are people from outside ArtEZ also coming to your editions at the external platforms?

Kleopatra: “I think our audience mainly consists of ArtEZ students, but we do have quite a few people from outside ArtEZ. For instance, students from Velp and Nijmegen and a general audience of people from different age range, who got recommendations from their friends to come. That's very exciting! We also have some frequent guests, who always come.”

Yuchen: “We actually have an online membership, where you can subscribe to our newsletter. These recipients are becoming the core members of our club.”

Kleopatra: “The usual suspects I would say, haha.”

Yuchen: “Sometimes teachers of ArtEZ come and watch as well!”

Yuchen: “It’s every other week.”

Kleopatra: “The editions in the living room of OK 74 are more cozy and are held on Tuesday’s. We call those the couch editions. And then we have the more official ones at external platforms, like Walter Books, on Friday’s. Those also have a bigger turnout.”

Yuchen: “The next big editions will be in Focus Film Theatre at the end of September and the Klooster Kino filmfestival Nijmegen in November.”

Do you have bigger plans for this in the future? To expand even more and to take this concept to other film festivals?

Every edition you curate the movie and the discussion afterwards based on a theme. Do you already have some ideas or plans for the theme of the next upcoming editions?

Yuchen: “We do have plans to collaborate with the Indonesian Film Society from London to devote a next edition to the second generation Indonesian migrants in The Netherlands. We would like to curate the theme with a fitting movie and a discussion afterwards, in which we will talk about blending into the Dutch culture and reflecting social structure and issues in Indonesia here in The Netherlands. That’s the idea, but we still have to curate more and dive into the topic to see which angle we go for.”

Kleopatra: “That’s one of the topics we would like to expand on and to think about.”

Yuchen: “For Focus Film Theatre we are going to work around the theme of feminism. We want to show Asian feminist films. Because a lot times here in The Netherlands, discussions about feminism are very Western oriented, in my opinion. We talk about the struggles of a specific group of people or of specific class, race or social status. There’s much more we can reveal and talk about and through it unite in solidarity in some way, through the women of different cultures. That collaboration is going to be part of the Feminist film festival from Focus Film Theatre, that celebrates 100 years of women’s voting rights in The Netherlands.”

Kleopatra: “We work with socially engaged or focused themes, like feminism and queer identity, but we also try to keep it diverse and have a good balance between heavy and light themes.” 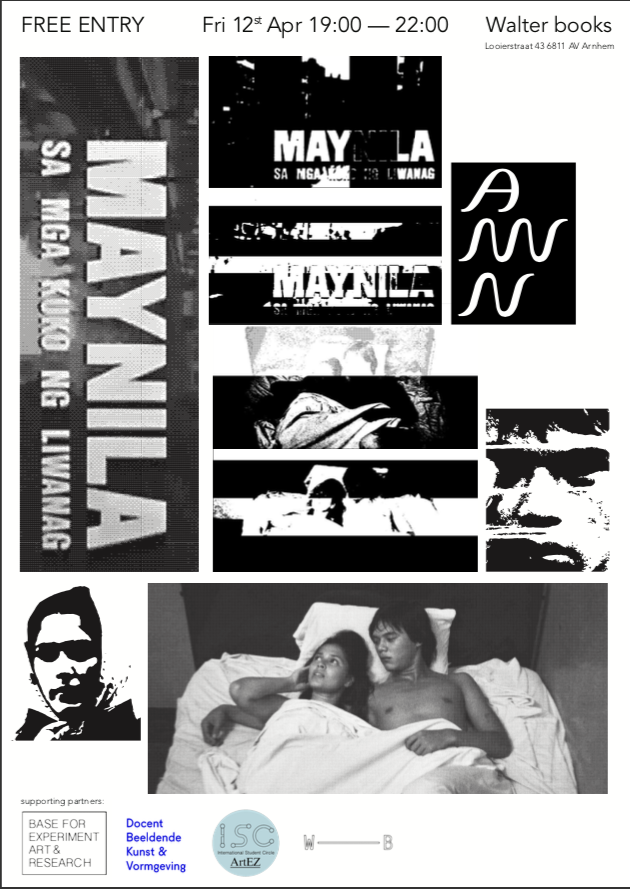 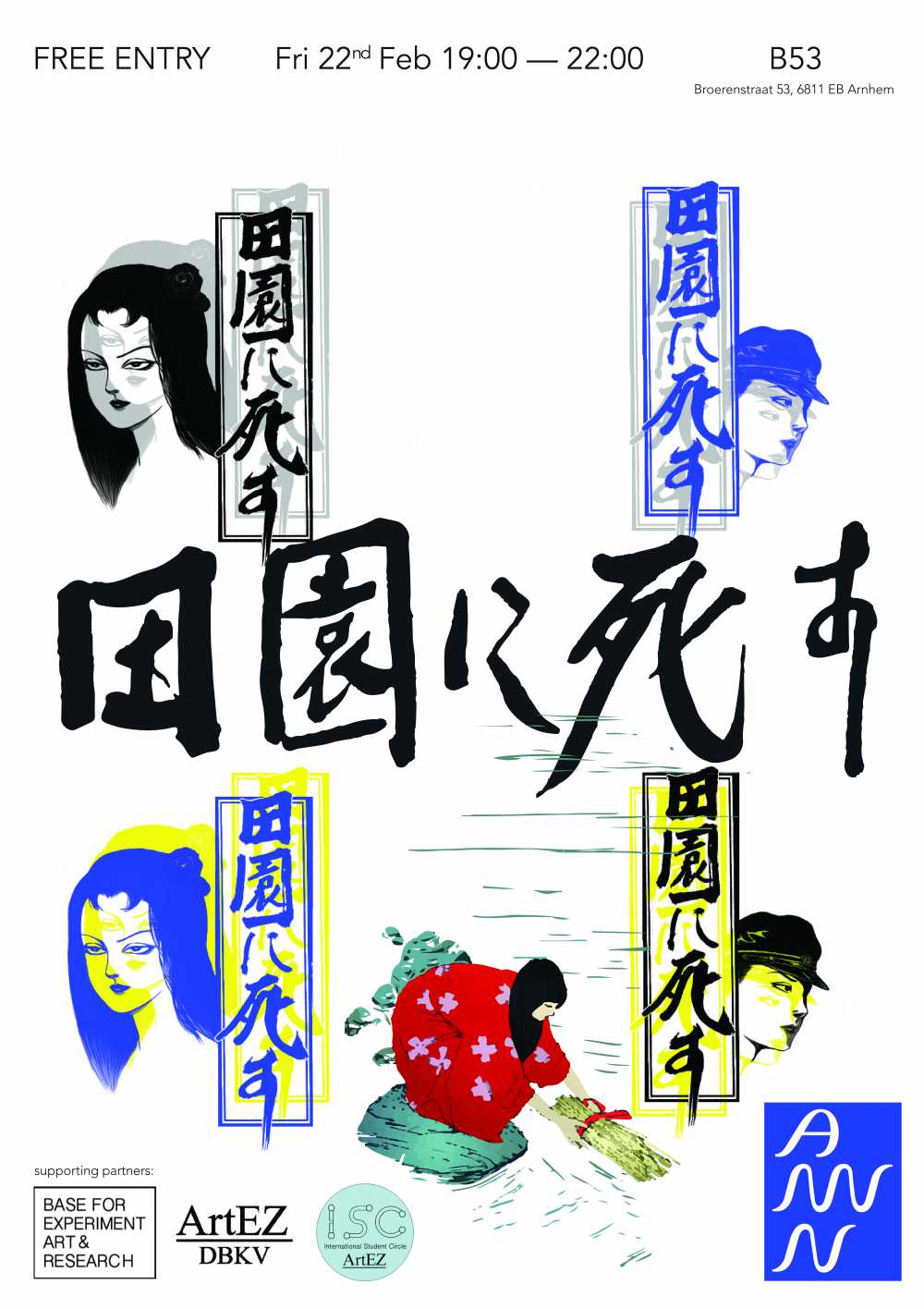 What was the best or most fun edition so far and why?

Yuchen: “There are so many elements to this question. There are films I like a lot, but also audience reactions that I love.”

Kleopatra: “And there are also editions where the setting really fits the movie, like the building or the food. Sometimes we serve special food at certain editions, for example Chinese New Year was when we served dumplings and the movie was food themed, which was super nice.”

What would you like to say to someone who has never been to Asian Movie Night before? How would you promote your events?

Kleopatra: “Well, who doesn’t want to watch a movie for free?! We have free popcorn!”

Yuchen: “Where else would you see movies like these? We don’t show commercial or mainstream movies that you might already know. A lot of time goes into research. Everything is very carefully selected and curated. I’m confident to say that we show movies of good quality in a cozy environment.”

Is there anything else you would like to add?

Kleopatra: “Every edition we provide an opportunity for students to show their work.”

Yuchen: “We try to encourage students to show their work – animations or short films – before the movie starts. They can use this opportunity to show it to a public audience in a proper setting. It’s a nice way to know how your work is being received!”

Kleopatra: “We would love to have more students taking this opportunity. All we need is your flash drive, haha.”

Yuchen: “So if you’re reading this interview and think this might be something for you, don’t hesitate!”

For me personally, this interview was very enlightening. It is very exciting to know that these students work so hard to provide an accessible ‘meet and greet’ with Asian cultures for other students, through movies and discussions in a cozy, relaxed environment. It makes me really curious to find out more about my own Asian heritage. I can’t wait to get more involved next year and go the next editions! Will I be seeing you there?